How to Effectively Promote an Event 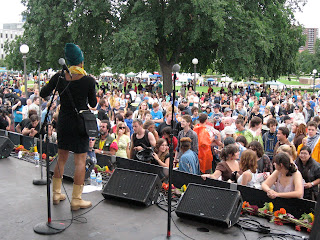 The bulk of this essay is going to be about the nuts-and-bolts aspects of promotion, but remember: an event is not worth promoting if it isn’t going to be big, meaningful and effective. Be intentional about everything, even before you begin. Whether you’re promoting a political rally, theater production or a rap show, set some goals. Aim big. Assemble a team. Know who your target audience is and who your secondary or ideal audience is. Know exactly what you want people to get out of the event. Schedule the date, time and venue for maximum effectiveness. All of this will help inform how you promote it. Again, a lot could be said about all of these things, but this essay is primarily concerned with spreading the word once these other details are in place.

I break down the process into these categories: mainstream promotion (print, radio and TV), internet promotion (social networking sites, blogs and email blasts) and physical promotion (flyers, posters and word-of-mouth). These days, you need all three.


MAINSTREAM PROMOTION
1. Start early. For most events, a month is enough time to properly promote. For bigger events like conferences and festivals, you’ll need more. One strategy is to have a few months of hints, vague information, save-the-dates and stuff like that, followed by a month of hard-core promotion leading up to your event.

2. Identify your hook. Your event has to stick out from every other event that’s happening. It has to be different and exciting. If your flyer says “Rap Show,” that’s not a good hook. If it says “Rally for Justice,” that’s not a good hook. A hook can either be super intentional, or it can be a silly gimmick-- it can even be as simple as a birthday party. Either way, figure out a way to make people care about your event beyond its actual content.

3. Write a solid press release. If you can’t, find someone who can. It should be one page long, and its goal should be to make the journalist’s job as easy as possible. Basically, write a short article about your event. Put the basics in the headline (“Twin Cities hip hop artists unite to combat homophobia”). Spell out the expanded basics in the first paragraph (“On this date, at this time, in this venue, this is going to happen”). Break up the paragraphs with some quotes, even if you’re quoting yourself. Use your hook as a thesis statement. Keep it as simple as possible, while still hitting your main two or three talking points. Be sure to have a line that says “For more information, contact this person” and fill in some contact information.

4. Work with other artists, activists or friends to compile an up-to-date list of press contacts in your area. Look at newspapers, weeklies, community papers, alt papers, magazines and newsletters. Look at major radio stations, community radio stations and podcasts. Look at all local TV stations. Put together as big a contact list as you can.  Maybe someone you know already has a list like this.

5. Send your press release out no less than two weeks before your event. That’s the absolute minimum. For a lot of TV programs, magazines and other media, it’s going to have to be even more than that. If you can make personal contacts with media people, that’s ideal. Send a separate email out for every person you’re contacting and personalize it. In the body of the email, you could even have a line about why that particular publication or media outlet might be interested in covering this event.

6. For radio and TV, make sure you have a media point person (or two) who is a charismatic, engaging speaker, on top of actually knowing about the details and spirit of the event.


INTERNET PROMOTION
1. When it comes to blogs and podcasts, most of the above applies. Compile a separate list of bloggers and online publications who might be interested in what you’re promoting and follow the aforementioned steps. Be sure to include a JPG image (possibly of your flyer) or a video with your press release, since most blogs rarely print text-only stories. If possible, build up a rapport with the bloggers beforehand, by commenting on other posts and linking to their sites, over a period of months or years.

2. The key to spreading the word over Twitter and Facebook is to be intentional about it. Don’t just HOPE that people will repost and retweet things. Explicitly ask them to. Obviously, you can’t do this every week, or for every event—only the BIG ones. Avoid promotion fatigue. But if the event is a big deal, the internet promotion campaign should be as big or bigger. Call in favors.

3. When it comes to Facebook event pages, they’re not the most effective promotional tool but they are absolutely necessary. Set one up three or four weeks before the event; invite all of your friends, and explicitly ask individuals to invite their friends too. Get thousands of event page invites out; even if people don’t come, they’ll know about it.

3. MySpace is dead. Their recent redesign was the last nail in the coffin. If your band or organization has one, make sure that there’s a BIG link somewhere that will send people to a better site, whether that’s your Facebook fan page, your official site or your Twitter.

4. If you have the means, shoot a simple promotional video and post it on YouTube. Link to it from all of your other websites. Just like the press release, make sure it has a defined hook. People will spread it around if it’s something funny or interesting and not just the bare-bones information. Do this a month or three weeks ahead of time, so people have time to spread it around.

5. Do not abuse email lists, but do not underestimate their power. You can only engage in a major email campaign once or twice a year before people start getting annoyed, so make it count.


PHYSICAL PROMOTION
1. A flyer is a piece of art. It is not just about information. The design of the flyer often communicates as much about the event as the content. Again, focus on your hook, and create (or commission) a design that makes it pop. Also, a human face on a flyer makes that flyer much more likely to be picked up and looked at.  Have multiple people look it over-- not just for spelling mistakes, but to make sure that all relevant info is included.

2. Putting flyers out at coffee shops and putting posters on bulletin boards probably isn’t very effective, but if you have the time and energy, do it anyway. Even if it doesn’t convince people to come to the event, it will get your name and/or cause out there a little more in the general consciousness.

3. Look at a calendar and mark down all of the events during the month before YOUR event that are similar or will have similar audiences. Take a small team to each of these events and hand out the flyers there.

4. Word-of-mouth is always the best kind of promotion. If you have five friends, and each of them has five friends, that’s a party. Again, don’t just hope that this will happen—work to make it happen. For example, if someone you know has a birthday on or near your event, suggest that they celebrate their birthday at your event (put them on the guest list and buy them a drink). If they accept, they’ll probably bring in a dozen more people. Be creative.

5. Look for sponsorships, whether from business, organizations, artists or any entity that can help you promote. If they can help spread the word, you can promote them at your show or event, let them in for free, etc. These kinds of tradeoffs are win-win.

2. I want to re-emphasize this: if you’re organizing an activist event, think big. Think very big. Plan stuff months ahead of time and aim for thousands, not hundreds and certainly not dozens. I think we often convince ourselves that only so many people actually care about our cause, when this isn’t necessarily the case. If we do a good job conceptualizing the event and an even better job promoting it, the sky is the limit. We can't afford to just assume that people are lazy and uncaring. It's always our responsibility to convince them to come out.

3. If you’re an artist, you can follow all of these steps and still fail, if your music or art isn’t any good. One curse of beginning artists is to be really good at promotion before you’re really good at art. This will draw a lot of attention to work that you are going to later look at as inferior. So take your time. Get tons of feedback from people before engaging in a significant promo campaign. The City Pages isn’t going to do a feature article on your unstructured, lo-fi basement hip hop. Play some shows, let the buzz build organically, and then start pushing hard.

4. For both artists and activists, look beyond the "usual suspects."  Work to combine and intertwine different communities.  Reach out to people whom no one has reached out to yet.  Strive to create events that are representative of your community, because that will affect who comes out to those events.

5. It really is about substance, in the end. You can get people in the door with a good promotions strategy, but you can’t get them to come back if your event isn’t engaging and awesome.